When it comes to studying Algebra, there are several basic mathematical terms that you will go through. Before we move into the detailed study of Algebra, it’s good to familiarize yourself with a few basic Algebraic terms.

An equation can be defined as a statement involving symbols (variables), numbers (constants) and mathematical operators (Addition, Subtraction, Multiplication, Division etc) that asserts the equality of two mathematical expressions. The equality of the two expressions is shown by using a symbol “=” read as “is equal to”. For example: 3X + 7 = 16 is an equation in the variable X.

A variable is a symbol that represents a quantity in an algebraic expression. It is a value that may change with time and scope of the concerned problem. For example: in the equation 3X + 7 = 16, X is the variable. Also in the polynomial X2 + 5XY – 3Y2, both X and Y are variables.

An equation that involves only one variable is knows as a One Variable Equation. 3X + 7 = 16 is an example of it.

A polynomial is formed by a finite set of monomials that relate with each other through the operators of addition and subtraction. The order of the polynomial is defined as the order of the highest degree monomial present in the mathematical statement. 2x3 + 4x2 + 3x – 7 is a polynomial of order 3 in a single variable.

Shown below is a graph that shows exponentiation for different values of bases a. 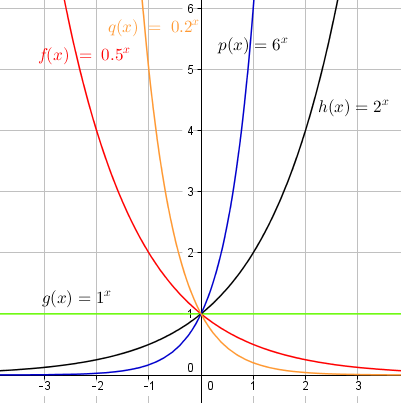 By looking at the graph we conclude that the numbers less than one approach to zero as the exponent value grows. On the other hand, the exponentiation values tend to infinity as exponentiation index grows for numbers greater than 1.