Segments and rays are under the subset of lines. A segment is a part of a line having two endpoints and has a particular length. On the other hand, a ray is also a part of line having one endpoint and the other direction extends indefinitely. Figure 1 illustrates a segment and a ray.

Definition of a Segment

A segment is a set of points consisting of two points of the line called the endpoints, and all of the points of the line between the endpoints. It is commonly used to represent the length, height, or width of a certain object and the distance between two objects. It is named by using the label of its endpoints and insert a line (( ) ̅) above the letters. Figure 2 shows segment AB which can also be written as (AB) ̅. 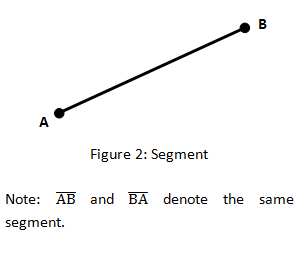 Draw two points and label it as C and D.

Connect the two points straight each other.

How many segments are there in the line below?

Use the points in the line as endpoints of the segments.

Midpoint of a Segment

Note: The two vertical lines indicate that the distances from the midpoint to both endpoints are equal.

Addition and Subtraction of Segments

The following expressions are also true for the lengths of the segments:

Find the length of (JL) in the figure.

Definition of a Ray

A ray consists of a point on a line and all points on one side of the point. It has only one endpoint. Rays are commonly used in physics to denote direction and also force. In naming a ray, consider two points in the ray: one is the endpoint and the other is any point in the ray. The label of the endpoint should be the first letter of the name of the ray and place a right arrow sign ( ( ) ) above the letters. Figure 5 illustrates a ray labeled as (RY) . 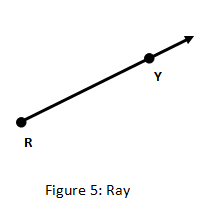 Opposite rays are two rays that lie on the same line having a common endpoint and no other point in common. In Figure 6 shown, (RS) ̅ and (ST) ̅ are opposite rays.

Draw two points and labeled it as A and E.

Connect the two points straight each other and extend the line from point E.

Find the number of rays that can be found in the line.

Consider two points in the line as the points of the ray.

There are 12 rays that are found in the line.