Measurement is expressing the size or amount of objects or events using numbers.

There are several reasons why we measure. Here are some of the real-life applications where in measurement is necessary: 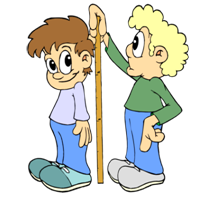 A system of measurement is a set of units grouped to be used on several applications. There are two systems of measurement that currently exist. These are the Metric system and the English system.

The metric system is the most commonly used system of measurement. The main feature of this system is the standard set of base units and the use of prefixes in powers of 10.

The table below shows the base units used in the metric system.

Some other units in the metric system are as follows:

Cubic centimeters `(cm^3)`, which is equivalent to 1 milliliter (mL).


The Metric System uses Greek prefixes inserted to base units to distinguish unit levels. Each prefix is equivalent to a certain power of 10.

In centimeter, the prefix "centi:" means one hundredth.

So, centimeter means one hundredth of a meter.

Thus, a centimeter is equal to ¹/₁₀₀ meters.

The symbol is cm (c for centi and m for meter).

In milliliter, the prefix "milli" means one thousandth.

So, milliliter means one thousandth of a liter.

The symbol is mL (m for milli and L for liter).

In kilogram, the prefix “kilo” means one thousand.

So, kilogram means one thousand grams.

The symbol is kg (k for kilo and g for gram).

Today, the metric system is changed into the International System of Units or SI.

The English system is a system of measurements used in countries like the United States and United Kingdom. Unlike the Metric System, the English System does not use Greek prefixes to distinguish unit levels but instead uses another unit..

The table below shows the some units used in the English System:

Below is a conversion table for some of the English units: