What is Least Common Multiple

The least common multiple is the smallest positive integer that is divisible by both given numbers.

How to find LCM

1) Multiple of a Number

This is an ideal method for larger numbers.This method is factoring both numbers down to the prime numbers that are multiplied to create that number as a product.


If the number just occurs in one number, then it has one occurrence. Here is a list of the most occurrences of each prime number from the previous example 2 → 2 times 3 → 1 time 5 → 1 time 7 → 1 time

Video of how to find LCM

Divide each of the original numbers by the common prime factor. Write the quotient below each number. Here's how to do it:

Repeat the process of pulling out and dividing by the lowest prime factor until no more common factors exist. Just repeat the process from the previous steps using the numbers 9, 6, and 15 this time.

Pull out a 3 from these numbers. 3 is the lowest prime factor, or the smallest prime number that is evenly divisible by both numbers. Find the Least Common Multiple of Two Numbers

Divide all three numbers by 3 and write the result below those numbers. Find the Least Common Multiple of Two Numbers

If two of the numbers still share a prime common factor, then continue the process until no pair of bottom numbers have a common factor. In this particular example, you're done.

Two small containers contain 250 litres and 550 litres of water respectively. Find the minimum capacity of a tanker which can hold the water from both the containers when used an exact number of times.

The first container will fill the tanker by 11 times and the second will by 5 times. 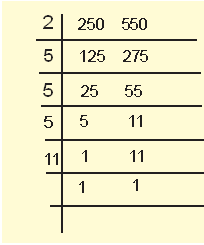